[Quick Note: This review assumes you have a working knowledge of the Fate/Stay Night universe. I wouldn’t recommend this game to people who haven’t played/seen the original VN/anime anyway, so you’re not missing out on much.]

I think at this point you can safely conclude that I’m a bit of a Fate/Stay Night fan, so when I discovered a PSP game based on the series there was no way I was going to leave it alone. Fate/Extra is set in an alternate universe to Fate/Stay Night where an incident has caused the world’s mana to dry up. In place of their normal talents, Magi have instead learned to connect their souls to computer networks, making possible Fate/Extra’s version of the Holy Grail War.

The concept is fairly interesting to say the least. A vastly powerful computer known as the Moon Cell (supposedly created by a pre-human race to monitor Earth, a fact which no one ever seems worried about) is used to choose 128 potential Masters from an original 999 participants, and then host a new Holy Grail War. Choosing from the heroes of the past that it has observed, the Moon Cell also summons 128 Servants to do battle in a knock-out style tournament (that’s a lot of processing power!). Needless to say, it’s a bit of a step up from the 7 Master/Servant pairs we’re used to.

While most Masters regained their memories after the preliminary rounds, you play a male or female character that has remained a blank slate, having been denied the return of their memories for some unknown reason. Teaming up with either Saber (same model, different hero), Archer (same model, same hero) or Caster (different model, different hero), all you can do is attempt to survive a war you know nothing about to return to a world that you don’t remember. You will meet up with a fairly diverse cast of other characters along the way, though while some may seem familiar very few play the same role as in the original Fate/Stay Night. It’s easy to see that extra effort has been put into the development of the Masters and Servants you are paired against, with each having a distinct and interesting personality. In fact, I found searching for information about my opponents’ Servants to be one of the most entertaining aspects of the game.

128 Masters means seven rounds of combat (one for each Servant class, what a surprise), with each round being held over a one week period. During the week each Master is required to obtain two key cards which can then be used to unlock the path to the final battle against their opponent. Masters who fail to obtain their keys are eliminated by default. The keys themselves are found in an area called the Arena, which has two floors to explore and changes each week, and also contains non-Servant enemies to train your Servant on. All of this means your days follow this kind of schedule: Talk to other Masters in an attempt to gather information on your opponent –> Training time in the Arena. Thankfully this basic schedule is often interrupted by various events and cutscenes, but near the end of the week, once you’ve already figured out your opponent’s identity, you’re pretty much limited to farming experience in the Arena. As you might guess, end-of-the-week training gets a little boring by the time you reach the seventh round.

The combat itself is…novel, I suppose. Each round you and your opponent pick six actions to take, choosing from the paper, scissors rock type options of attack, break and guard (I’m sure you can guess which beats which). Alternatively you can use one of the multitude of skills learned by your Servant. Once per round a Master can cast a spell, which you can have up to two of, which are determined by whatever accessories you are wearing (but we’ll get to that later). Each round you are (rather unfairly) shown up to three of your enemy’s actions depending on either how many times you have fought them (for normal enemies) or how much information you have gathered on them (for Servants). Your opponents are limited to specific combinations of attacks, and while you can attempt to memorise their patterns, you will find the trusty pen-and-paper combo to be your greatest asset. As the game progresses enemies will have access to more attack patterns, making it harder and harder to predict what they will do based on the actions you already know they will perform. While the system is fairly well done and different from any I’ve encountered previously, innovation can only count for so much. As you may have already surmised, first encounters with enemies amount to trial-and-error matches, with your face getting punched in as often as not. In a game where you can’t save while dungeon-crawling this is hardly ideal. Admittedly I was killed only a few times while in the Arena, but I can see some players becoming incredibly frustrated with having to repeat already-completed segments of the game. Conversely, once you’ve learned and transcribed your opponent’s repertoire of patterns fights become almost laughably easy. The system may not be everyone’s cup of tea, but I personally enjoyed throwing myself against my opponent and eventually being able to counter their every move with a skill bordering on precognition (if not quite precognition itself).

Servant battles work slightly differently. Because you only encounter them a few times before your final battle (the Moon Cell ends any other fights after 3 turns), you have very little idea of what they are going to do each turn. Servants also have access to a number of skills, and of course each has the most powerful type of skill of all: their Noble Phantasm. In order to counter your ability to predict their actions each turn, every Servant you face has roughly ten times your health (it’s shown as ???? while over 10,000, but since my health never rose above 4,000 I’m sure you get my point) and comparable, if not outright superior attack power. I’m serious here, if you get hit with a Noble Phantasm without being at full health and guarding, you can say goodbye to any chance of surviving your fight. One of the perks of getting all the information on your opponent is meant to be that you can see when they’re going to use their Noble Phantasm, but in the final few fights the game revokes that perk without telling you, resulting in surprise Noble Phantasms to the face (which are never fun).

I’d better quickly mention the accessory system I glossed over earlier. Your character can wear two items of Formal Wear which grant them mana bonuses and the ability to cast specific spells. There’s a fairly decent variety of items you can find or obtain, but I only ever used the same types. Healing is pretty necessary, so that was a must, and the other choice was a piece of equipment I found in the very first week and never replaced. This second Formal Wear allowed me to interrupt enemy skills and even their Noble Phantasms, which was a life-saver I couldn’t pass up. Because the two items (or at least types of items) I started off with were more or less indispensable I wasn’t really able to try out the others, so I think some sort of system where you could learn abilities after using items for a certain number of battles would work well here.

Being a portable game, Fate/Extra doesn’t have the best graphics. It does pretty well with what it has to work with, but as always I would have preferred a console version. The actual art is also a little off when it comes to the conversation sprites, becoming especially noticeable with previously encountered characters like Rin and Shinji. It’s not bad to the point of affecting the overall experience, but I was still a little disappointed by it. It was nice to see some background music being brought over from the original visual novel, but other than that I have nothing special to say about the soundtrack. The voice acting is sporadic at best with very few scenes containing it, though I have no complaints about the actual quality.

Summary – Fate/Extra was fun; I have no regrets about playing it. However, I played as someone who already knew about and thoroughly enjoyed the Fate/Stay Night universe. Anyone who wasn’t previously a fan of the series may not enjoy this game due to its repetitive nature and odd combat system, but then again, anyone not already a fan probably wouldn’t pick it up to begin with. 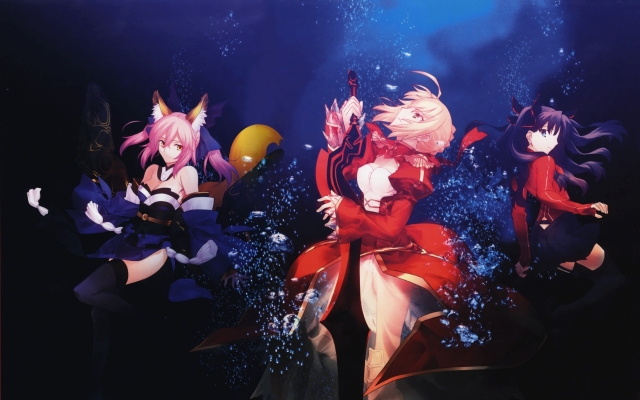 I'm a Gamer that dabbles in a little bit of everything. I'm big on Video Games, Visual Novels, Anime, Books and TV Series, but there's more to me than just those!
View all posts by Silvachief →
This entry was posted in Reviews, Video Game Reviews and tagged Extra, Fate, Fate/Extra, Fate/Stay Night, Image Epoch, Moon, PSP, Type, Type-Moon. Bookmark the permalink.