To The Victor Go The Spoils – A Short Halloween Fanfiction

[Hi there everyone! I may not be posting Weekly Ramblings at the moment but I figure a Halloween post is still in order! This is a short crossover Halloween story I submitted for a contest featured on Fuwanovel, which you can check out here if you’re interested. It features characters from Fate/Stay Night and Tales of Vesperia, which I realize is an odd mix but I hope you enjoy it anyway!] 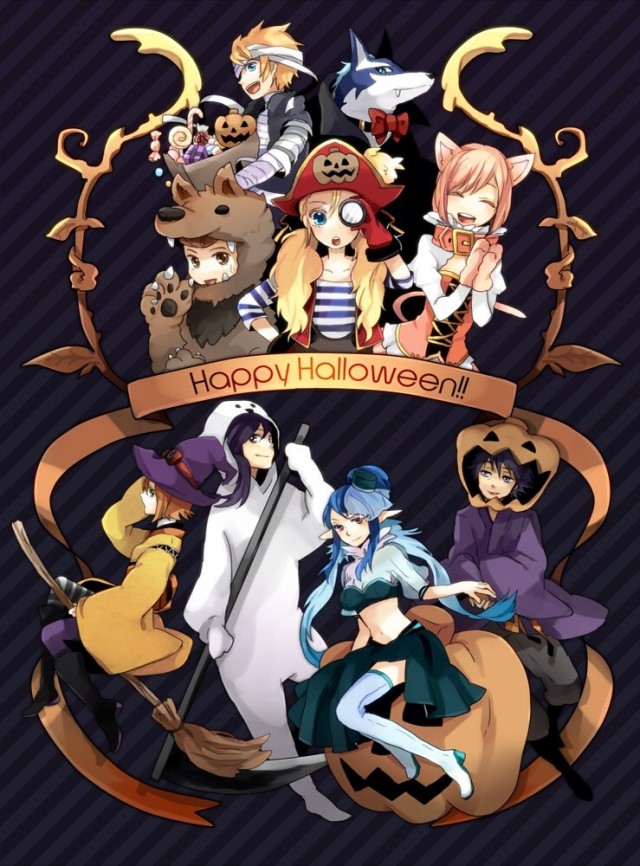 “But Shirou, I don’t understand! Why would anyone give me anything if I wear such a horrific costume?” Queries Saber, clad head to toe in purple robes complete with pointy hat, staff and a huge, green, warty plastic nose. “I can’t even use magic!”

“Come on Saber, lighten up!” Shirou exclaims, doing up the clasps on his shining, silver greaves. “As I explained earlier, it’s all part of the tradition. Halloween is a time where everyone dresses up as something scary and visits others’ homes in order to be rewarded with candy. And besides, I’m going to enjoy being your knight for once.”

Grinning from within the helmet concealing his fiery red hair, Shirou stands up to face Saber and splays out his arms. “Well, how do I compare to what you’re used to seeing?” He asks.

Blushing a little before remembering her indignance, Saber replies by punching him lightly on the shoulder to conceal her hesitation. “If the War were still in progress you’d be a shining beacon for every stray blade nearby. What’s the point of plastic armor that won’t even protect you?” She says clearly, before mumbling. “But it does suit you, you know.”

Scratching the back of his head, Shirou looks down in embarrassment before laughing. “Still, it’s a shame we could only find you that hideous getup. Trust Rin to own just witch costumes.”

“That’s a poor excuse for an apology, Shirou, and I still don’t get the point, either.” Saber mutters, looking away and sighing. “If I wanted something good to eat I’d just wait for your cooking.”

Shirou shakes his head. “You’ve got to learn to have fun with things, Saber. I’m flattered that you enjoy what I make for you but there’s more to life than just everyday meals.” He chuckles, looking at the clock as he continues. “In any case, if we don’t leave now we’re going to be late meeting up with the others. They’re coming all the way from another world for this, you know.”

Using his own gauntleted hand to gently grasp Saber’s, Shirou begins to hurry out of the house. “W-wait! What’s this about the others?” Saber complains as she’s dragged out the door, flustered and struggling. “Don’t tell me I have to see them wearing this! What will they think of me?!”

“So you said this was called a Hell-Low-Wean costume, right?” Says the Princess, her eyes peering through holes haphazardly cut in a plain cloth sheet. “All of these different cultural practices are fascinating! But…are you sure you’ve got the right idea? I can barely see anything!”

Looking up from putting the finishing touches on his own outfit, Yuri scratches his chin in thought before explaining. “While I know it’s not something we do here in Terca Lumireis, Shirou gave me a pretty good run-down on the whole thing. All we have to do is dress up in weird stuff and we get free food. It’s pretty simple, really.”

“Arf!” Adds Repede, the bell hanging from his tail chiming with his every movement. Along with the red plastic nose and fake antlers, his costume has already been completed.

“That’s the spirit, boy! See, Estelle? Repede’s already rearing to go!” Yuri continues as he dons the red and white hat he had been working on to match the rest of his costume.

Stamping her foot, Estelle grumbles. “But why do you get such nice, cheery clothes while I’m stuck with this? It’s not fair!”

Yuri sighs. “If you had started working on this back when we agreed to take part you could have been anything you wanted. I’ve been preparing this for weeks!”

“But you only told me about it this afternoon, Yuri!” Estelle cries, the cloth around her eyes becoming damp. “The only thing I had time to find was this sheet! You’re terrible!”

Sensing Estelle’s distress, Repede glares at his master in disdain before strolling over to the Princess’s side and resting his head on her lap, his eyes conveying his deepest apologies for Yuri’s transgression.

“See? Even your faithful companion agrees with me on this one!” Estelle exclaims, a triumphant note creeping into her voice before she continues in a more sombre tone. “You used to be so nice to me Yuri…”

Yuri shakes his head, stifling a laugh. “Oh come on, Estelle, it’s not like I’ve ever been that nice to you. Besides, do you really think I would let someone as important as you walk around with a sheet over her head?” He says, pulling a second red and white ensemble out of his pack. “Don’t you think it’s about time you got changed, Mrs Claus? We’re going to be late.”

“That’s five bags now, Shirou! There’s no way he can claim victory after this!” Saber yells hystericallly over her shoulder, the witch costume now discarded completely in favor of her full set of armor.

“What?! She has five bags already?! Don’t worry Estelle, I won’t let her beat us!” Exclaims Yuri, his Santa Claus costume looking battered and torn as he runs off after the King of Knights, a mad gleam in his eyes.

Sighing, with shoulders drooped, the remaining three look on at the disaster taking place before them. “While if anyone was going to do it I know it would be them, I can’t believe they turned Halloween into a contest…” Shirou groans. “I’m just glad they’ve managed to avoid killing anyone so far…”

“Arruuu…” Repede agrees, the miniature sleigh teetering precariously on his back teeming with bags of candy and the tattered remains of both contestants’ costumes.

“I concur.” Estelle murmurs. “Though it could have been avoided if Yuri hadn’t started boasting about every little thing. I’m sorry this is how things turned out after you went to the trouble of asking us along.”

Looking apologetic, Shirou attempts to counter her apology. “No, it’s fine, really. It was Saber that challenged him to make good on his boasting; she can’t stand it when people assume they’re better at something than her.”

Repede hangs his head, ashamed of his master’s conduct. His own apology radiates from the way he slinks along next to the other two.

The trio continue to trail their friends as they dash madly from house to house, frightening unsuspecting civilians into handing over all of their candy as they present themselves at each door. “I can say one thing for sure, though,” Estelle says musingly, “Yuri and Saber are a lot scarier now than they ever were in their original costumes…”

I'm a Gamer that dabbles in a little bit of everything. I'm big on Video Games, Visual Novels, Anime, Books and TV Series, but there's more to me than just those!
View all posts by Silvachief →
This entry was posted in Weekly Ramblings and tagged fanfiction, Fate Stay Night, Fate/Stay Night, Halloween, Tales of Vesperia. Bookmark the permalink.