Before I say anything else at all, I have to say this: Family Project has a beautiful idea behind it. Unfortunately that foundation idea becomes muddied and blurred by incredibly poor storytelling and even the plot itself, which isn’t something you’ll catch me saying often. Despite its flaws, however, Family Project did succeed in bringing a smile to my lips on multiple occasions with its strange amalgamation of (somewhat) serious scenarios and comedy.

At its heart, Family Project is the tale of a group of individuals coming together in an attempt to surpass life’s hardships. Whether homeless, disowned or simply incapable of living alone, the Family Project is born of a need for respite from the harsh reality of modern day living. But how can a group of complete strangers accomplish anything together? Is it worth building bonds with others when they will inevitably be smashed to pieces? These questions haunt Tsukasa Sawamura, a fiercely independent young man forced into the group by his inability to ignore those in need. Why should he care about family when his first one cast him out? 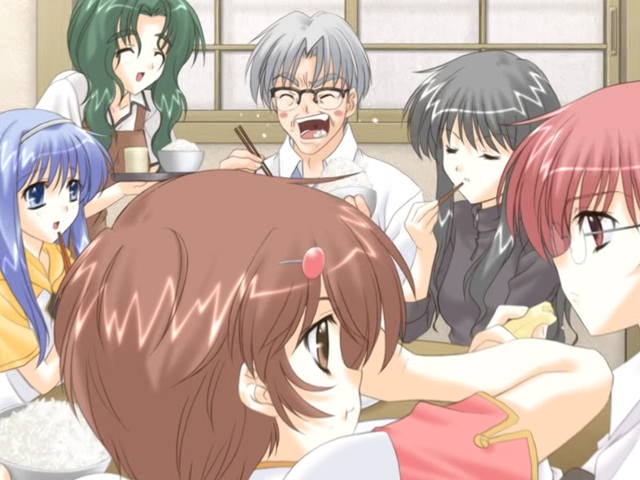 As I mentioned earlier, the idea of a group of downtrodden strangers coming together to work for a better life is one that appeals to me. Admittedly, Family Project gets things right on multiple occasions with scenes so heart-warming and charming that you will find yourself smiling without realizing. Some of the jokes will make you roll your eyes, but you’ll still laugh at them anyway. Unfortunately, that’s where the good features end. I don’t know if it’s the translation or the original script, but the writing lacks any sort of depth and does not make for an engaging read. Scene changes are abrupt, especially at the start of the novel, often leaving you feeling that something has been missed out.

Beyond the writing, the plot itself is rather lacking. As well as being poorly put together in general, random elements are thrown into the mix in an attempt to liven things up and instead only serve to distract from what should be the main focus of the story. There was never a point where I could say I was seriously invested in what was going on and couldn’t wait to find out what was going to happen next. There was also a problem with repetition; what may as well have been the exact same scenes were repeated over and over again to the point where I could probably recite them in my sleep. That’s okay if the scenes are funny and the quality of the humor grows with each repetition, but the majority of them were just more of the same tired slapstick routines and dull conversations. 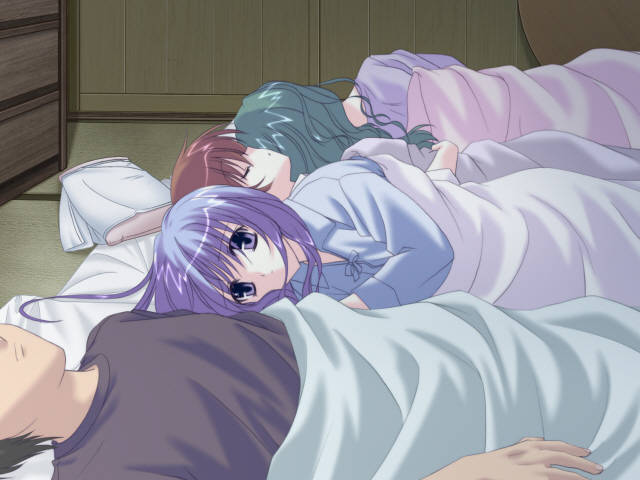 While there are five different heroines/routes to choose from the story splits quite late into the novel, making for a long (and somewhat tedious) common route followed by relatively short heroine-focused portions. To be completely honest I only finished two of them because I simply didn’t care about the other characters, and only one of those endings was in any way satisfying, with the other’s logic being nearly impossible to follow. While the members of the Family Project are well characterized there just isn’t anything that draws you to them; it’s like they were just there to fill in space while the important characters were off-screen. You may think that I was wrong in not giving those other routes a chance but by the time I had finished with the characters I actually liked I just couldn’t bring myself to sit through any more, which is actually a first in my Visual Novel reading experience.

Family Project is an older (2001) Visual Novel and the art style definitely reflects its age. Still, the visuals were mostly pleasant and weren’t one of the factors that hindered my enjoyment. While there’s actually an untranslated remake with all-new artwork, it looks so horrific that I much prefer the original. The BGM mostly didn’t register so I can’t go into whether that was good or bad (though I have vague memories of enjoying some of the tracks).

Summary – One of my favourite parts of Family Project was its ending song, which doesn’t say anything good about the rest of it. The concept is sound but its potential is clouded by an overall poor execution, while the older visuals and BGM don’t tip the balance either way. I don’t regret my time with Family Project as it wasn’t especially long and some of it was genuinely charming, though I don’t ever see myself going back for another attempt at finishing it.

[If you’ve read the review and would like a second opinion, there’s a comment by Jake down below who enjoyed Kazoku Keikaku a great deal more than I did, so it may be worth a read for you.]

I'm a Gamer that dabbles in a little bit of everything. I'm big on Video Games, Visual Novels, Anime, Books and TV Series, but there's more to me than just those!
View all posts by Silvachief →
This entry was posted in Reviews, Visual Novel Reviews and tagged D.O., Family Project, Kazoku Keikaku, Review, Visual Novel, VN. Bookmark the permalink.