Reviewing Muv-Luv has left me a little conflicted. I believe that all visual novels should stand up on their own regardless of whatever is planned for their sequels, but looking at Muv-Luv that way doesn’t quite do it justice. All three parts (Extra, Unlimited, Alternative) work together to build up for a grand finale at the expense of the earlier games and I’m just not sure how I feel about that. I’ve decided to review the instalments as separate visual novels, though I ask you to keep in mind that each requires you to read the one before it to reach its full potential.

If you take a look at forum topics with Muv-Luv Extra as their subject, you’ll find a large number of people advising others to skip this first part. The reason for this is that, whereas the latter thirds of the Muv-Luv story have science-fiction and action aspects, Extra is a pure romantic comedy. While I can see where these people are coming from, and while it’s certainly the weakest of the three stories, I still think Muv-Luv Extra is worth your time.

Shirogane Takeru is a normal high school student. He has a childhood friend, Kagami Sumika, living next door who wakes him up each morning, he gets into arguments with his class representative and he spends his afternoons with his best friend at the local arcade. When he wakes up one morning with the heiress to one of Japan’s most successful and influential families sleeping next to him, he’s more than a little surprised. Mitsurugi Meiya has no problem inserting herself into Takeru’s school and using her money and connections to attempt to win him over, though in her mind they’re already destined for each other. Stuck between the girl he’s spent his life with so far and the girl who’s willing to buy him the moon for the rest of it, and completely oblivious to both of their feelings, Takeru simply does his best to continue living the way he has been till now.

Muv-Luv Extra is a mixture of normal comedy, hilarious exaggerations and absurd truths that will probably keep you laughing for most of its length, though I can imagine some readers growing tired of the repeat gags. The romantic aspects take a back seat till near the end of the tale but are no less well done. In fact, the only issue I have with it is that nothing really significant happens. Serving as the foundation for the Muv-Luv series, this is the game where you get to know the characters you’ll be seeing for the rest of the experience and as such many of the scenes are simple slice of life affairs designed to act as a comparison for the rest of the story.

While there are five heroines in Extra, Meiya and Sumika are very obviously the main ones and act as the cornerstones for the story itself. Their routes are mostly the same except for the last few scenes, whereas the other three heroines each have their own separate endings that are mostly unrelated. The characters themselves all have very strong personalities that nonetheless manage to develop over time, but by the time I had finished the main two routes I had very little inclination to read the rest of them. It wasn’t that I disliked the other characters; it’s just that they were overshadowed by what were really the canon heroines. So as not to simply write off those other routes, however, I played through one of them and found it to be much like the rest of Extra except without the comedy, which didn’t leave very much behind. If you’re looking to set yourself up for Unlimited in the best way possible though, you’ll want to check out Ayamine Kei’s route as it introduces a character that’s reasonably important later on.

Despite being an older game Muv-Luv’s art is in no way dated. The character models and poses have a ton of personality to them and the backgrounds aren’t half bad either. I don’t think I’ve encountered a visual novel that’s been more adventurous with its sprite positioning and camera techniques; characters will “walk” around the screen, becoming smaller as they get farther away and vice-versa, and the camera will always show you where Takeru is looking. These features are used to better effect in Unlimited and Alternative but they’re still impressive in Extra. In addition to this there are some small touches that serve to make things seem that much more real, like being able to see a character’s breath on cold days. The soundtrack does show its age a little but is no less effective than more modern examples at conveying the mood of a scene and sound effects are put to good use continually. Age (the developer) has done a wonderful job with Muv-Luv’s technical aspects. 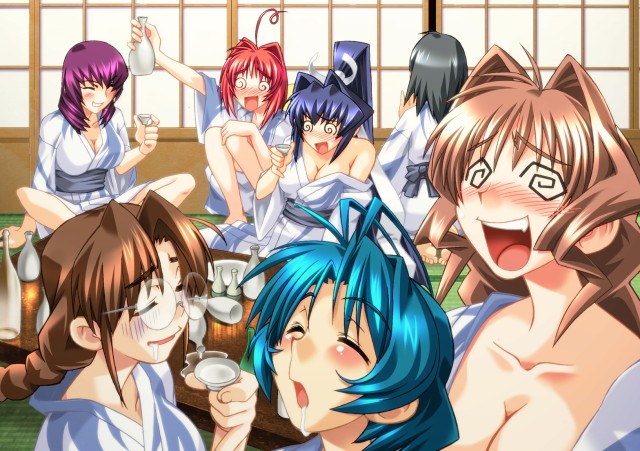 Summary – As a stand-alone story Muv-Luv Extra isn’t anything special. It’s fun to read but aside from the very ends of the routes the story just doesn’t go anywhere noteworthy. As a precursor to the other titles, however, its worth is near immeasurable, allowing you to connect with the Muv-Luv characters before getting into the really important stuff. Though it was released in 2003 Extra has no trouble competing with its newer counterparts in terms of production quality, even if I can’t quite call it exceptional.  I recommend playing at least the main two routes of this first instalment, but the rest aren’t quite interesting enough to say the same about.

I'm a Gamer that dabbles in a little bit of everything. I'm big on Video Games, Visual Novels, Anime, Books and TV Series, but there's more to me than just those!
View all posts by Silvachief →
This entry was posted in Reviews, Visual Novel Reviews and tagged Age, Extra, luv, muv, Muv-Luv, Review, Visual Novel, VN. Bookmark the permalink.