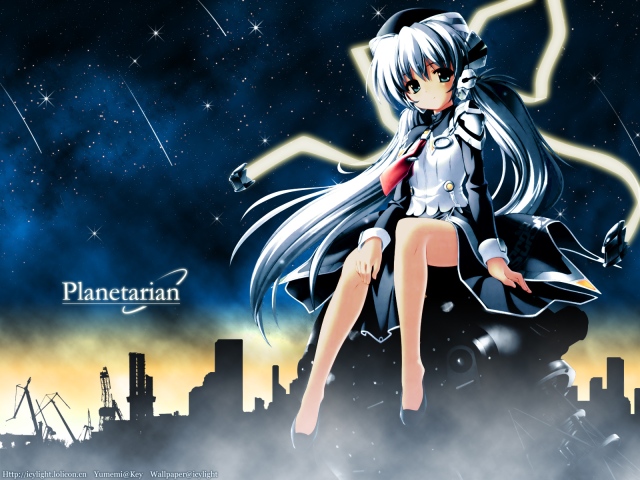 Chances are that you’ve heard about Planetarian’s recent official steam release. It’s a pretty massive step forward for visual novel localization, especially considering the general understanding that Key was never going to officially translate its titles. I’d already read Planetarian in the past (it’s on our Visual Novel Recommendations List, after all) but decided I’d better run through it another time to refresh my memory, and I’m glad I did. Planetarian is probably the greatest example of concentrated visual novel quality, telling a simple but powerful story in its four hours or so of content that still manages to capture your imagination and emotions. I was certainly entertained despite it being my second run-through, so you can be sure it’s worth picking up.

The world’s in a pretty pathetic state, by anyone’s standards. Those who have managed to survive this long do so by rummaging through former societies’ leftovers, and are constantly plagued by the Rain which eats through just about everything it touches. Lured by the promise of untapped treasures, a lone Junker makes his way through an abandoned city. Wary of deadly robots and lethal mines, he’s more than a little surprised to find he’s the 2,500,000th customer of what must be the sole surviving planetarium on Earth. Its attendant humanoid robot girl wouldn’t let something as insignificant as the end of the world get in the way of delivering the best possible experience to her customers, however, even if she could understand that her most prized performance was never going to be seen again. 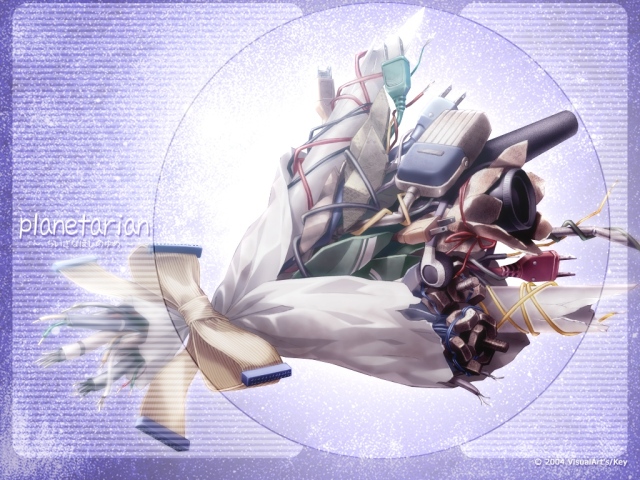 I’m consistently amazed by Planetarian’s ability to promote profound thought while telling what is really a very simple story. It doesn’t weave anything near an epic tale but still presents unforgettable characters (or character, I suppose) and leaves a lasting impression because of the issues it raises. One of the great things about the way it does this is how it manages to set the scene it wants to get across without becoming bogged down in details, which is a major problem for some visual novels; I knew enough about the story’s background for it to have coloured my experience even though exploring it was never Planetarian’s focus.

Key is famous for playing with its audience’s emotions. What makes this particular story special, though, is that the character they use to do that is distinctly not human. The planetarium’s android attendant, Yumemi, could never be mistaken for a living, breathing person, an impression which is confirmed multiple times over the course of the story. Despite this, by the end of the visual novel, you find yourself caring for her as much as you might for any other character which is something I think Key deserves a lot of praise for. Without going into detail, Planetarian has some very high and very low emotional moments that are handled exceptionally well. 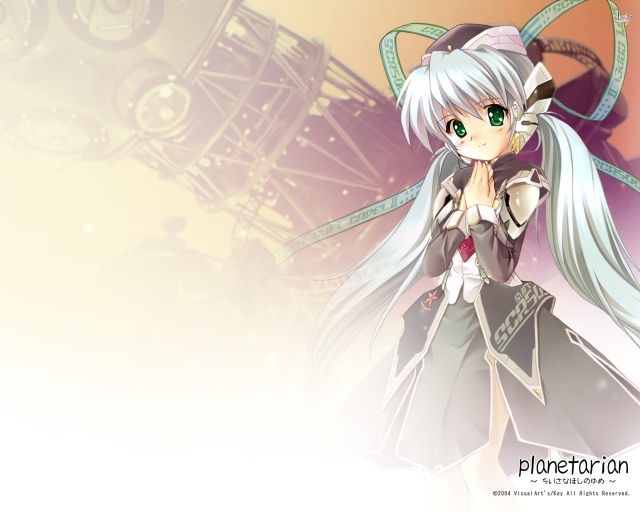 Having been originally released in 2004, Planetarian’s visuals aren’t as flashy as what you may be used to, though they’re still nice to look at. Relatively drab background art still manages to do its job and is made up for by Yumemi’s wonderful character design and the small number of CGs that show up. The unique feature of having the character sprites take up the entire screen works well, especially considering Planetarian’s focus is very much on its single visible character. While many parts of the visual novel are completely lacking background music, what you do get fits the feeling of the story perfectly and is very easy on the ears. For the most part the official translation is good and sounds natural but doesn’t quite have the quality of appropriately idiomatic English I’ve seen from the best translators (eg. Dangan Ronpa, Grisaia no Kajitsu). There were a few typos in the version I played, though Sekai Project was very quick to reply to my report and I assume they’ve been fixed for the final release.

Summary – Planetarian is absolutely the best visual novel of its length out there, fitting the role of a short story in visual novel form expertly. It keeps its readers well entertained for its entire length and manages to include poignant emotion in a unique way that is definitely worth experiencing. Despite being an older title its visual and audial components work together well even if they don’t stand up to either newer or longer visual novels’ standards. All in all, I think it is almost required reading for visual novel lovers and even makes for a great entry point into the genre for newcomers, especially considering its easily-digestible length. 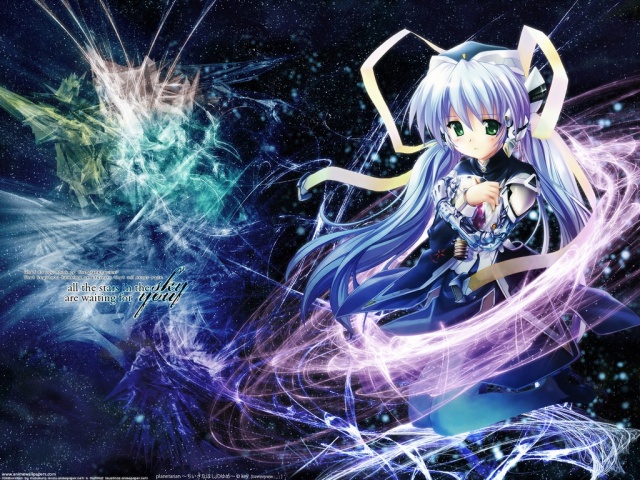 I'm a Gamer that dabbles in a little bit of everything. I'm big on Video Games, Visual Novels, Anime, Books and TV Series, but there's more to me than just those!
View all posts by Silvachief →
This entry was posted in Reviews, Visual Novel Reviews and tagged Key, planetarian, Review, sekai project, Visual Novel, VN. Bookmark the permalink.