I’ll admit it. Lately, I just haven’t felt like writing as much as I used to. Every now and then, however, an anime series comes along that I just can’t keep quiet about. Words just fly onto the page as soon as I watch the last episode while ideas flit rapidly around my head. Kokoro Connect is one such series. Featuring the same director as Ef, a show that I didn’t like, there was already a reason for me to be wary about this anime. Now that I’ve finished it I find myself feeling overwhelmingly grateful to the person that recommended Kokoro Connect to me in the first place (you know who you are, Lifesong). With some incredibly relatable characters and relationships you can really sink your teeth into, it’s a bit deeper that what I normally go for and I wholeheartedly recommend it.

The Cultural Research Club at Yamaboshi High is as close-knit as it gets; the members attend it each day more to spend time with one another than for any research purposes. Are they as close as they appear on the outside, though? Are they as close as they themselves believe they are? When a supernatural entity known only as Heartseed takes an interest in them, their bonds are stretched to their very limit as they discover just how little they really know about their “friends”. While swapping bodies with others may sound amusing to begin with, it’s only the first in a series of unbelievable circumstances used to extract every drop of entertainment possible from the group. It’s not a question of whether someone will break, so much as who will break first.

Kokoro Connect is an anime that really made me sit back and think. Not just about what was going on in the story, not just about the thoughts and feelings and even themes that were floating around behind the scenes (which is out of character enough for me), but about exactly what the anime itself meant to me. I went through multiple phases of thinking a particular event or expression of character development had been done poorly only to find myself reflecting back on those points later on and rethinking my opinion. Kokoro Connect is deep on so many levels without making any special effort to show off or hide that extra layer. It’s great because you just don’t know how things are going to work out. I’m not talking about those events that you just know are going to have a positive ending, because they’re in there and that’s fine, but more about the overall direction the series is going to take. Despite featuring a hefty slice of life component it keeps you on your toes and I really enjoyed that.

I love that so much of what goes on in Kokoro Connect is so amazingly normal and still manages to be entertaining. Yes, there’s a supernatural aspect but it’s only there to provide an excuse for normal things to happen and it does that in an interesting way. I’m finding this really hard to explain, but it’s like you’re peering into a regular world where the “antagonist” is the writer of the series tipping scales one way or the other just to see what happens. While things aren’t skewed way out of proportion just for entertainment value (which is one of the things I chafed at early on while watching), they still manage to catch and hold your attention, which makes the series really stand out. Having said that, and having understood why it might have been done, I can’t help but note that it leaves a lot of the possible more extreme situations unexplored. There are so many places where the shit gets close enough to hitting the fan that you can smell it without any trouble, but nothing actually happens. Whether that bothers you or not will be a matter of personal preference. 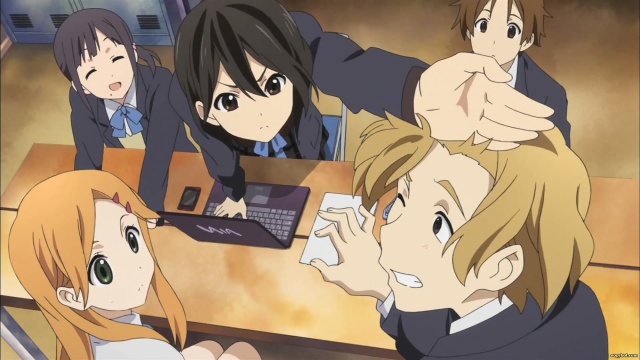 I think the last time I really talked about character development was in my Toradora review. It’s something that, depending on how it’s done, can make or break a series. When I tell you that Kokoro Connect does this particular job better than most other anime by an order of magnitude, I hope you get at least an idea of what I mean. What makes it special in this case is that all of the characters are so very believable. Now I don’t just mean that you can understand them, I mean that these characters act and think the way you might expect an actual person their age to, which many shows fail to do. For instance, it’s not just that they’re embarrassed by their feelings, it’s that they really don’t know what to do with them. They don’t just instantly get along, there are tensions within the group and between members throughout the show that make sense. That realism carries over into how they change throughout the story as well and you can see the delicate balance of emotions within the characters as that change is occurring. While it could be that I’m over-thinking this, the mere fact that I’m reading into it so deeply is an achievement in itself.

Visually, the series looks like a more serious K-On but doesn’t break any new ground. In fact, it’s probably one of the least visually appealing slice of life shows I’ve seen in a while. That’s not to say it’s bad, as character expressions and other such things are conveyed well enough, just that you won’t be watching it for eye candy. I would love to say that it has an amazing soundtrack to balance that out but the truth is that it wasn’t particularly memorable. Technically speaking, the series is pretty average.

Summary – Kokoro Connect is a stunning example of what the slice of life genre can be. Its incredibly simple formula and series of events maintain a wonderful level of entertainment because of the complexity and believability its characters and their relationships add to the near-perfect mix of romance, comedy and drama already present in the show. While it passes by a lot of opportunities for a more emotionally extreme story and therefore doesn’t quite provide the level of entertainment that would net it a higher score, much of what it attempts is done so overwhelmingly right that it deserves all of the praise I’ve heaped upon it.

I'm a Gamer that dabbles in a little bit of everything. I'm big on Video Games, Visual Novels, Anime, Books and TV Series, but there's more to me than just those!
View all posts by Silvachief →
This entry was posted in Anime Reviews, Reviews and tagged Anime, kokoro connect, Review, Silver Link. Bookmark the permalink.