Posted on February 1, 2015 by Silvachief 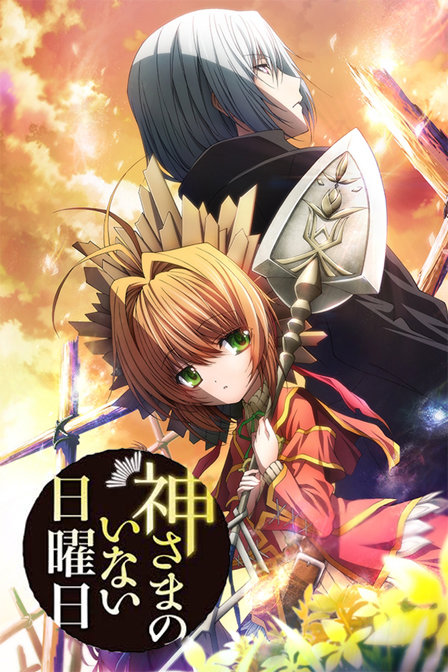 In my head I have a sort of formula for the “perfect anime” that can be useful to refer to when writing reviews such as these. That formula also includes a list of effects the anime in question should have on me. Things like feeling a connection to the characters, missing the series once it has finished and more technical things like appropriate pacing and conclusion to the story. Sometimes, however, a show comes along that my formula simply doesn’t do justice to, which is where Kami-Nai comes in. Despite a major lack of overall plotline and attempts to tie up loose ends it still managed to keep me interested in what was going to happen next for the course of its twelve episodes. Its technique of repeatedly throwing new, intriguing and not at all connected concepts at its viewers has been enough to earn it a grudging recommendation from me.

Imagine a world where God has given up. Things just haven’t turned out the way He planned, so he has decided to simply leave us all to our own devices. No more death, no more new life. Our bodies simply lasting forever, no matter how rotten or decrepit they may be. There’s hope though, if the thought of remaining after death repels you, in the form of Gravekeepers; mysterious beings without emotion that put the dead to rest and grant them peace. Ai Astin is a young Gravekeeper that took on her role after her mother’s death. She’s loved dearly by her village and enjoys every day of her life there until a mysterious stranger slaughters them all in a single afternoon, rendering them unable to function without removing the spark of life that yet remains. What follows is a tale about the world without God. Sprawling cities of the dead resisting proper burial, strange powers granted to those with a strong enough will, and a small girl’s desperate attempt to make sense of where she fits into it all.

I’m a strong advocate for the opinion that setting is a major factor in whether a plot is any good. Kami-Nai spends its entire time in the spotlight showing off its concept and all of the interesting features contained within the world it has built without really telling a story as such. There’s just so much it wants to share, with ideas oozing from every available faucet and yet still not being able to fully escape. I can’t even mention more than vague ideas of what goes on because anything else would probably count as a spoiler. The enjoyment you get from this series comes from your interest in all of the separate pieces it presents, and that’s fine because all of them will grip you while still fitting together wonderfully. Of course that doesn’t quite change the fact that there isn’t a whole lot going on outside of the individual events and that may be enough to turn some people away.

As I’ve heavily alluded to, Kami-Nai consists of a series of smaller chapters, each of which tells its own little story. Side characters show up and then are brushed away as soon as the show is done with them and many of the recurring characters exist without contributing much at all. I’m not trying to say that it’s a terrible crime or anything but it does mean that it’s hard to see the characters as anything more than two-dimensional. There are also a lot of ideas that the show picks up without ever finishing off. While they’re not big enough or important enough that I cared, especially given Kami-Nai’s length, they were still very noticeable.

On top of having some quite novel ideas, this particular anime also feels unique visually. Certainly, each component is something that’s been seen before but the overall look of the characters and the world around them is very pleasant. I personally felt like the use of bright character designs on a relatively dark and often dreary background made for rather effective juxtaposition. Look back through my blog and see how often I actually comment on visual design with proper terminology, I dare you! Sound-wise Kami-Nai makes good use of fading into their ED sequence while story events are still occurring, which is quickly becoming a favourite technique of mine. The rest of the soundtrack fits the feel of the series without standing out.

Summary – Kami-sama no Inai Nichiyoubi is an inventive imagining of a world abandoned by its creator, coming up with concepts and ideas that pin you in place despite a lack of overall cohesion. Keeping that in mind, I would still happily watch another season because the experience was consistently interesting the whole way through. This is also one of the few titles that has compelled me to make a legitimate comment on its visual design, so take that as you will. While I wouldn’t say it gets anywhere near my top ten, Kami-Nai is still solidly on my favorites list.

I'm a Gamer that dabbles in a little bit of everything. I'm big on Video Games, Visual Novels, Anime, Books and TV Series, but there's more to me than just those!
View all posts by Silvachief →
This entry was posted in Anime Reviews, Reviews and tagged Anime, kami sama no inai nichiyoubi, kami-nai, Madhouse, Review, sunday without god. Bookmark the permalink.