[Anime Review]: Magi: The Labyrinth of Magic and The Kingdom of Magic

One of the major complaints viewers have about longer anime is that they contain too much filler content. People want to get straight into the meat of the plot without having to wade through meaningless content to get to it. What if I told you there was an anime that will make you desperately long for filler, that there was an anime whose story you will only count as a distraction from what you really want to see? What if I told you that anime was Magi? Getting so many things right and so many things wrong, this is one of those shows that you probably won’t hate watching while still wishing it had taken another direction.

Aladdin is alone. Without knowledge of who he is, where he comes from or what he should do with himself, all he has with him are the clothes on his back and his flute. On his journey he runs into Alibaba, the minion of a slaver, and Morgiana, a slave herself. With his two companions freed from the bonds that held them, Aladdin’s trio travel the world together, uncovering the secrets of Magic and the mysterious Dungeons strewn about the land. They laugh, they cry and they live together, learn from each other and discover things about themselves that they never knew. Along the way they meet a plethora of fantastic people and beings, as well as a few not-so-savory ones. 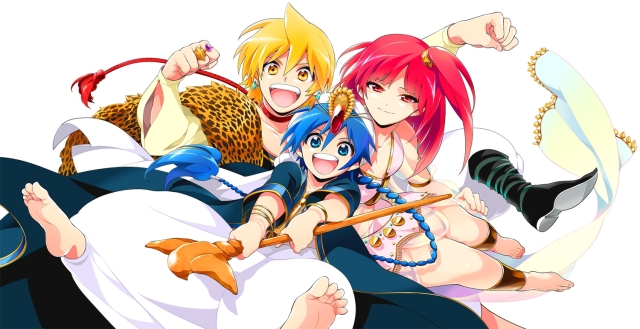 Let me tell you right now that the above is not a summary of Magi: The Labyrinth of Magic or The Kingdom of Magic, though it might seem that way from the earlier half of the first season (and the entire first opening). The characters have some fantastic interactions with each other and it would be hard not to enjoy their travels. What frustrates me is that the formula that worked so well in the beginning of the series is thrown away for the majority of it in favor of what amounts to a typical shounen storyline. Aladdin, Alibaba and Morgiana, who work so well together, are separated for massive periods of time as the story focuses on other characters who just don’t have the same type of magic that draws you in as the original three, and the finale of the second season barely features any of the protagonists. The spotlight switches off the characters you care about, and their interactions with others, and onto massive battles which stretch over multiple episodes far too often.

So it doesn’t seem like I’m just complaining, Magi most definitely has the potential to entertain you. While the story didn’t go the way I personally would have liked, it’s not terrible by any means. The show is very, very good at introducing its new characters and making them relevant to the story at hand and its viewers. Unfortunately, it’s also very, very good at ignoring those characters once it’s grown bored of them and then only bringing them back when it’s convenient to the overarching plot. Similarly, there are a lot of plot ideas that are mentioned but never truly explored…wait – hold on – aren’t I meant to be talking about good points here? One of the other things Magi does well is examining character motivations, especially when it comes to the rulers of the countries involved in the story. A lot of the people portrayed are very understandable and even easy to empathize with, which is always a huge bonus in anime. While I’m at it, I should probably mention that Magi has some very good humor at times; I was laughing uncontrollably on a number of occasions. Unfortunately, some of its humor (mostly related to Aladdin’s mysteriously potent and social-decorum-defying love of breasts) only comes across as awkward, though thankfully that only shows up once in a blue moon.

Magi has incredibly unique character designs, with every single person in the world it portrays having huge overbite issues which makes it difficult for them to avoid showing their upper row of teeth at every opportunity (/sarcasm). Other than that point, the show is animated wonderfully. There’s an energy and fluidity to the characters’ movements that is really pleasant to watch. Setting designs are unique and receive a fair amount of variation which is always nice. The background music, as well as the opening and ending sequences are well suited to both the scenes they’re used in and the anime as a whole.

Summary – Magi offers a window into a world where three interesting and likeable companions go on a magical journey, before promptly drawing the curtains and moving on. Despite some great character designs and the ability to properly integrate them into its story the show bypasses a lot of the potential it has for entertainment in favor of that same shounen story we’ve all seen before. It has some fantastic humor, visual design and theme exploration as well, but that doesn’t make up for battle scenes and overarching story that are drawn out and contrived. Though I enjoyed my time with Magi and even tentatively recommend it, those feelings are overshadowed by the disappointment it makes me feel.

I'm a Gamer that dabbles in a little bit of everything. I'm big on Video Games, Visual Novels, Anime, Books and TV Series, but there's more to me than just those!
View all posts by Silvachief →
This entry was posted in Anime Reviews, Reviews and tagged A-1 Pictures, Anime, kingdom of magic, labyrinth of magic, Magi, Review. Bookmark the permalink.

2 Responses to [Anime Review]: Magi: The Labyrinth of Magic and The Kingdom of Magic