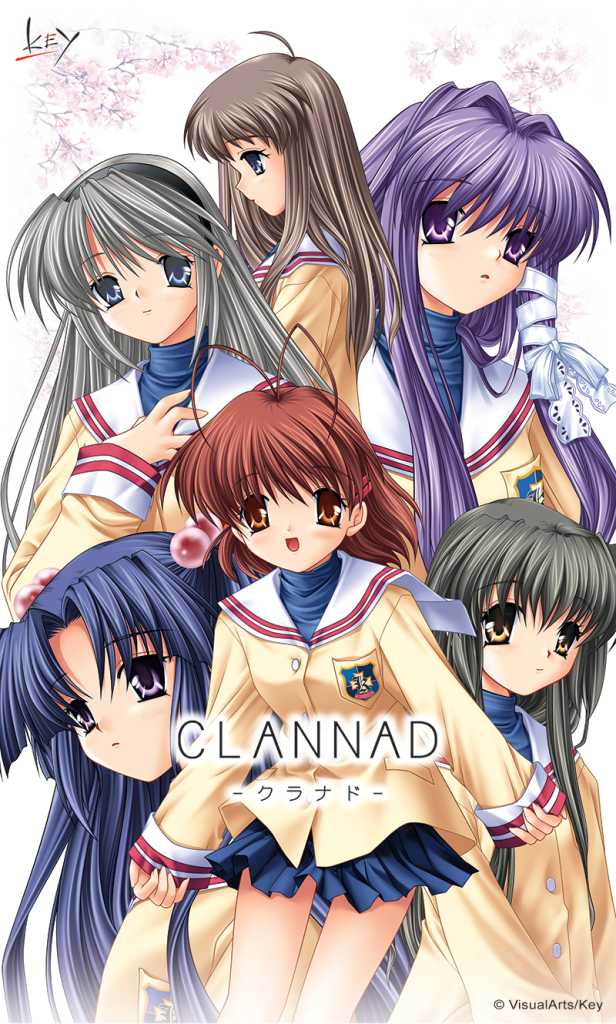 [A review copy was kindly provided by Sekai Project]

Clannad is a very special visual novel for a lot of people and with its recent Kickstarter campaign it became the first visual novel to crowdfund over $500,000, so you can tell it has a substantial following in the West. Originally released in 2004, it is often referred to as a classic and for once I have no trouble seeing why so many people adore it; with the incredibly poignant emotion it offers it would be hard to deny its ability to forge a connection with its readers. However, today I am here to tell you that although I can understand Clannad’s fanbase, I do not count myself among them.

I’ve been provided with a very helpful media package this time around, so here’s the official synopsis!

“Clannad follows the story of Hikarizaka Private High School student Tomoya Okazaki, an emotionally-distant delinquent student. After losing his mother in an accident and subsequently falling victim to an abusive, alcoholic father, Okazaki meets a strange young girl, Nagisa Furukawa, who is repeating the year due to a severe illness. Furukawa enlists Okazaki to help revive their school’s drama club. With nothing much else going on in his life, Okazaki agrees to help, making friends with many of the school’s other students along the way, and learning about all of the different problems and challenges that they face…”

To get it out of the way I need to admit that this is my second play-through of Clannad, though that doesn’t mean a great deal because my opinion this time around is exactly the same. I’ll start out with the positives, because I need to acknowledge the fact that Key actually did a fairly decent job here (especially compared to more recent releases like Rewrite). The emotion I mentioned earlier is definitely there and, at certain points of the story, in spades. Even at times I felt disconnected with the narrative as a whole I found myself tearing up at the situations faced by the characters and as often as not it was positive emotion rather than sadness. You don’t get a lot of VNs that can make you happy in the same way that Clannad does. There are emotional gut-punches, too, so you’re covered no matter which end of the scale you prefer. Key also does a fantastic job of showing you how and why each character affects one another’s development over the course of the novel and that can make for some very interesting reading, partly because the writing style makes it easy to get inside each character’s head and feel what they’re feeling.

Unfortunately, there’s a “but” that comes after that paragraph.

Those emotional moments are Clannad’s aim right from the get-go and the problem it faces is keeping its audience entertained while it gets its pieces into place, meaning that your enjoyment of it will be directly proportional to how much you are entertained by its slice of life and comedy segments. While I was pleasantly surprised by some of the humor I encountered the sheer volume of time that can pass with nothing at all happening is staggering. Unfortunately, to top it all off, while the highs and lows are great while they last they are also incredibly short lived. Without putting together an actual graph to illustrate my point, I hope you can appreciate that the time you have to put into Clannad to get anywhere significant really doesn’t match up with what you stand to get out of it unless, as I’ve said, you enjoy the fluff it’s stuffed full of. It’s worth noting here that the second half of the VN, known as After Story, is significantly better than the first, though it still suffers from the same problems at points.

To get to After Story, however, you need to sit through each and every one of the preceding ten routes. That might not sound too bad, but believe me, the fluff builds up. Even during my first playthrough I was struck by the overwhelming desire to skip entire storylines because the ratio of entertaining content to filler is just that skewed.

Clannad’s art has not aged well, even when compared to other visual novels of the time. While the backgrounds are fine its characters look unnatural and it boasts a relatively low count of CGs for its length. You could argue that the art style is part of the visual novel’s overall charm, though I’d be inclined to disagree with you. That all said, the expressions on the sprites do a good job of conveying character emotions and even manage to succeed in fostering some “HNNG” moments of cuteness overload (yeah, don’t see me saying that very often). Key fans will enjoy the nostalgia granted by the soundtrack but as far as I’m concerned it simply does its job alongside the usual-quality voice acting. Sekai Project has added a neat feature in the form of the Dangopedia, a resource that aims to fill readers in on aspects of culture that might otherwise elude them. There are some interesting entries that I would never have picked up on myself but others don’t really go far enough to explain why a particular reference might be considered comedic in the novel. There are minor typos scattered throughout and I spotted at least one mistranslation, but in general Sekai Project has done a great job of bringing Clannad to the West in an official capacity.

Summary – I understand completely why some readers look back on Clannad with extreme fondness. It reaches some emotional highs and lows with relatable characters that could make it easy to connect with the events it portrays. However, the narrative, like the art, is outdated, taking extended periods of time to set up for the climaxes it aims for and featuring large swathes of content that are unnecessary and tedious to read. For me personally, that’s a deal-breaker and I doubt that I will ever pick Clannad up for a third read or recommend it to anyone.

If the slice of life and comedy are your kind of thing then you’ll have a great time (or a terribly depressing one, depending on how you view it).

(Add up to 2 points for personal taste)

I'm a Gamer that dabbles in a little bit of everything. I'm big on Video Games, Visual Novels, Anime, Books and TV Series, but there's more to me than just those!
View all posts by Silvachief →
This entry was posted in Reviews, Visual Novel Reviews and tagged Clannad, Key, Review, Visual Novel, VN. Bookmark the permalink.