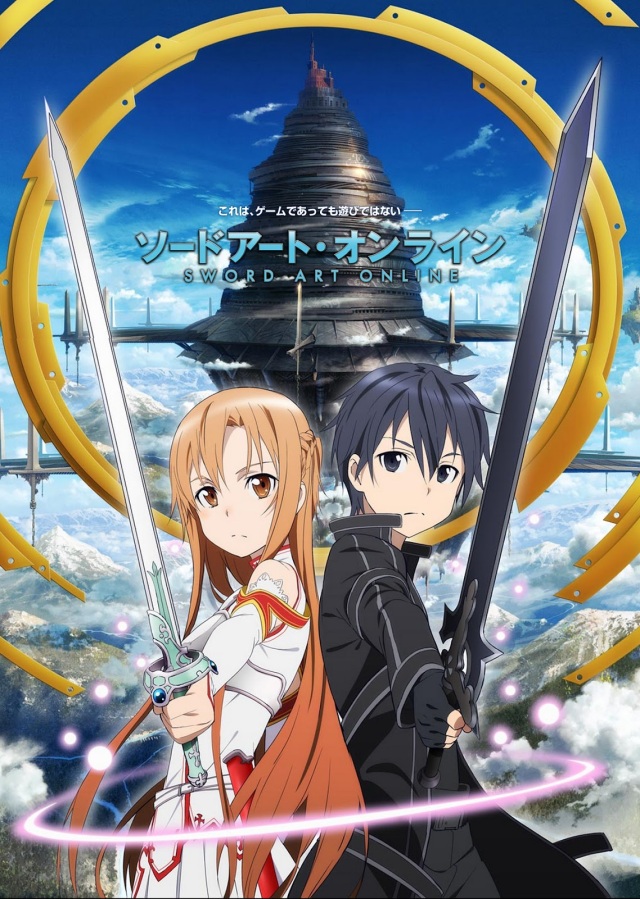 [Note: After finally getting around to watching SAO II, I decided a needed to re-write my original SAO review to include it, so here we go!]

I adore the idea of virtual reality gaming; there’s very little I wouldn’t give to be able to experience it first-hand. For now, however, I have to make do with fictional representations of it, and Sword Art Online is one of the series that represents it best. With some very likeable characters, high-stakes VR gaming conflict with real-world repercussions and a certain amount of plain old fun, it reaches The Geek Clinic’s Recommendations list. However, its plot arcs are not made equal and it certainly has a fair amount of flaws which may be enough to turn away potential fans, first and foremost among them being an unfortunate level of fan service and misguided attempts at haremization.

Sword Art Online is the newly released VRMMORPG, or Virtual Reality Massively Multiplayer Online Role Playing Game, and as expected all 10,000 released copies logged on simultaneously for the grand opening. When it came to logging out, however, the highly anticipated game became something much more sinister. Trapped in virtual reality, the players are forced to come to terms with the fantastical world that is as deadly to their real-life selves as it is to their avatars. The only way out is to finish the game. Kazuto “Kirito” Kirigaya was in Sword Art Online’s beta test; he knows the starting areas like the backs of his hands. What he’s not so familiar with, however, is how to work with others to survive, and how to deal with the grief when they are killed. Is it still a game when your life is on the line? 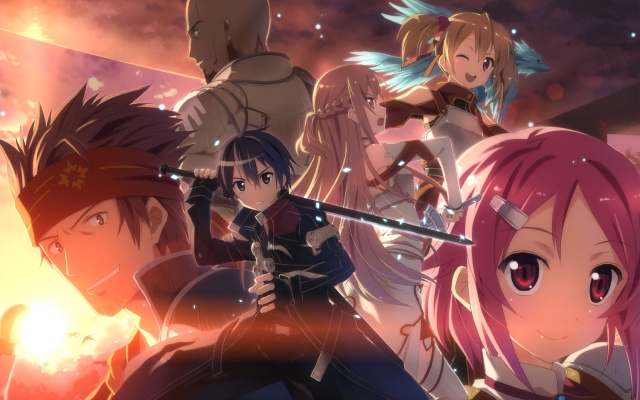 What Sword Art Online is, exactly, is hard to describe, so I’ll start with a general overview before moving into individual ratings for each segment. There’s some action that is well done when it features, some romance which is heart-warming to say the least and a pinch of comedy that shows up every now and then. All in all, it forms a fair representation of a variety of MMO-related issues and their consequences, showcasing a variety of believable emotions and reactions while never becoming bogged down in them and remaining entertaining throughout…mostly.

In general Sword Art Online is quite nice to look at, especially when it comes to its backgrounds; if we ever do get virtual reality then this is what I hope it looks like. The character models and movements are also very well done, which is necessary in a show with so much combat. As I often say, the BGM is such that it fulfils its purpose without being truly memorable.

Sword Art Online is told in four major parts, and as I mentioned earlier these have not been made equal. On one hand it means that the series is able to explore a number of varying virtual settings to give us more time with certain characters and expand the reach of the overall plot, but on the other it means that there are several jarring changes in pace throughout the show’s 49 episodes, and this is where that haremization I mentioned earlier comes in. It seems that one of Sword Art Online’s goals is to build up every new heroine as a potential love interest for the protagonist, Kirito, and this results in a number of design decisions that negatively impact the anime as a whole (and just plain detract from the main plot). Firstly, it results in fan service that begins in the second arc and really hits its stride (unfortunately) in the third, undermining the strong personalities of the characters involved. Secondly, it results in important characters missing out on screen-time that they indisputably deserve and, finally, it precludes the exploration of established character relationships that have been the series’ strength at one point or another. 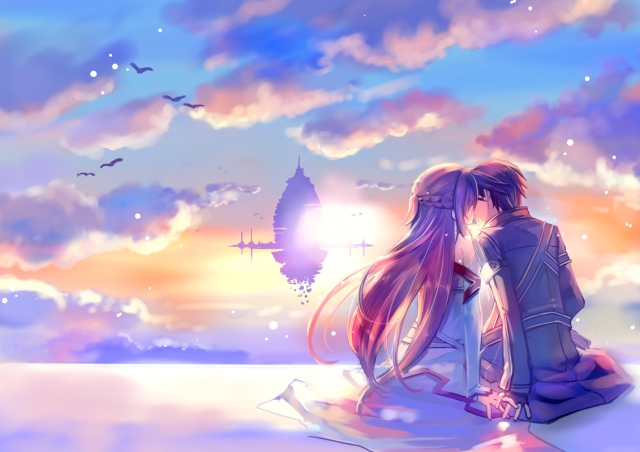 To elaborate on that, I’m going to have to start working through the show arc-by-arc. The synopses are spoilers only in that they reveal information that is never hidden by the series.

In the beginning the show aligns with the synopsis I wrote earlier. Kirito is stuck inside Aincrad, the flying castle with a plethora of diverse floors to ascend and monsters to defeat in typical fantasy-MMO style. This arc represents Sword Art Online at its best, covering the experiences of a variety of characters as they come to terms with their predicament and interact with one another via an episodic first half before bringing it all home with a story-heavy conclusion. There’s a good amount of mature, well-handled romance alongside a compelling and emotional main story with little room to get bored amongst the frequent action and diverse cast.

Then we come to Alfheim Online, a second MMO that continues the fantasy feel but with…fairies? Well, it allows the characters to fly, I suppose. Anyway, this arc differs from the first in that it ditches the episodic strategy, but also in that it is the first to remove Kirito from his supporting cast. Without spoiling anything, that includes a certain important character from the first story that every viewer should know and love by this point and many find this to be an incredibly questionable writing decision. With the exception of a new major heroine, all of the characters introduced in this arc are forgettable and the romance I enjoyed from the first arc is pushed aside in favour of harem cultivation.  Still, it’s fun continuing to follow Kirito’s adventures in MMO land and a number of interesting real life issues are presented in conjunction with certain character relationships to make for an experience that is still very enjoyable despite not standing up to the first instalment. 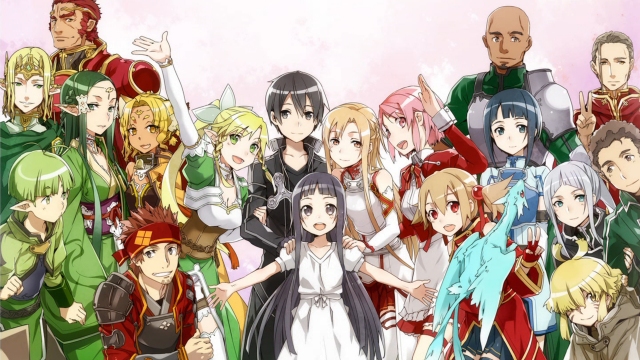 And then there’s Gun Gale Online, in which Kirito transfers to a sci-fi shooter MMO in order to track down a character who is managing to kill the real life players of his opponents. Here we have another main heroine introduced alongside a great deal of fan service and every single other character from the previous season is ignored. The GGO arc takes a long time to get itself going and feels out of place compared to the earlier fantasy settings, especially considering the heavy degree of exposition and inner monologuing that takes place without adding anything to the experience. Additionally, the combat encounters simply aren’t as exciting relative to what we’ve been used to and the premise as a whole is pretty shaky. And…well, Kirito is made to look like a girl because the writer needed to show his ultimate power over the series…or something.

Following a relatively small side story that brings the gang back together again SAO’s second season concludes with Mother’s Rosario which focuses on Aincrad’s heroine, Asuna, back in Alfheim Online. It’s a refreshing return to form for the series in that the implications of virtual reality technology and a variety of emotional character interactions are explored with meaningful developments occurring in both the real world and within the game, though it does continue the habit of shutting out most of the side characters in favour of shiny new ones. After Aincrad, I feel that it does the best job of representing what Sword Art Online should be trying to accomplish. 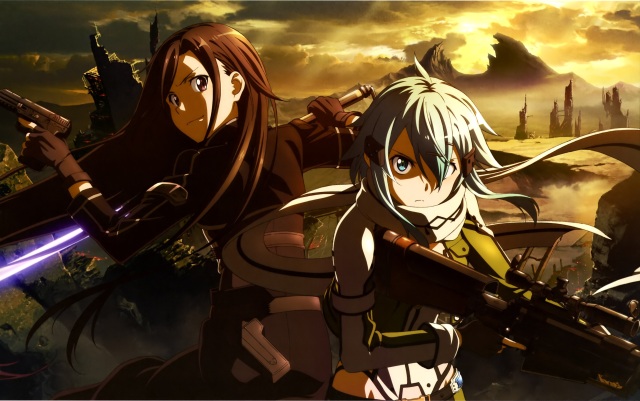 Summary – Sword Art Online was a lot of fun to watch and succeeded in a lot of areas. It explores a variety of settings and issues related to virtual reality gaming that make for some fantastic experiences made that much more enjoyable by the characters involved and the relationships between them. There’s at least a small dose of epic in every arc that, along with the inclusion of believable real-life consequences, has little trouble keeping things interesting throughout the story.

However, that’s not to say there aren’t low points to the series. The dramatic differences between the first arc and those that follow it make for some jarring changes in tone and several uncomfortable scenes where the writers try their hardest (via the use of fan service and convenient sidestepping of existing character relationships) to set Kirito up with yet another heroine, and that alone may ruin the series in the eyes of some viewers. 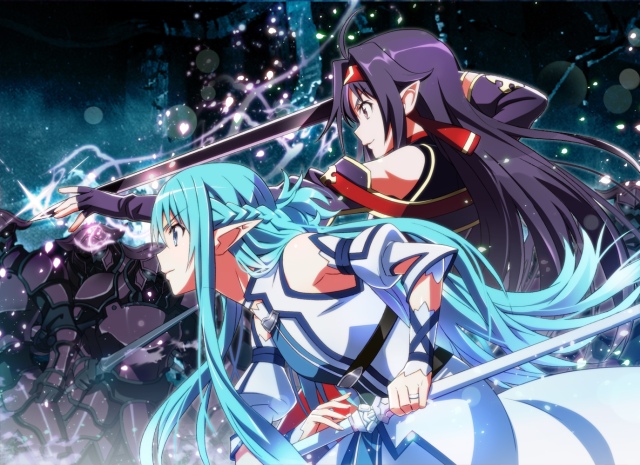 I'm a Gamer that dabbles in a little bit of everything. I'm big on Video Games, Visual Novels, Anime, Books and TV Series, but there's more to me than just those!
View all posts by Silvachief →
This entry was posted in Uncategorized. Bookmark the permalink.