Posted on October 16, 2016 by Silvachief
This week I would like to present a post written by Kai of Deluscar, who has just celebrated his blog’s fifth anniversary! A massive Congratulations and Thank You to Kai!

Greetings, Kai of Deluscar here, and today I’m on The Geek Clinic to analyze and dissect visual novel protagonists. But before I begin, I would like to point out what I say here doesn’t necessarily apply to ALL visual novels, but enough of them feature this type of protagonist to allow one to decipher a pattern.

A visual novel has a structure similar to reading a picture book, and is an incredibly immersive medium. But another one significant reason that contribute to it’s immersion is because of visual novel protagonists and their self-insert natures.

Black hair, black eyes which are concealed most of the time and the only character without voices — most visual novel protagonists.

Most visual novel protagonists don’t have much of a personality. They are mostly dull and bland, but with adequate moral behaviors so that you don’t really hate them (which is also a big reason as to why heroines love you, because you’re SO KIND, apparently). Some visual novel protagonists can be pretty dense too, almost to the point of idiocy. Though that’s a bit hard to fault the medium with, since you can say most visual novels are set in harem situations (what with the multiple heroines and all), and in such tropes, a dense protagonist almost always goes hand-in-hand.

Personality aside, their visual designs are usually boring as well — black hair, black eyes, very standard hair designs and so on. They are designed to make them look like your everyday ordinary guy, and when the heroines are designed so flamboyantly, the contrast is just plain to see.

Indeed, most visual novel protagonists are designed to self-insert, which is exactly the reason for their rudimentary designs. As you might expect, this is also something fairly common with light novels as well; both visual novels and light novels have strong first-person narratives so designing their protagonists like that is definitely a good idea for immersion and self-insertion. Though in visual novel’s case, having a dull protagonist means you, the player, will also be the one to define his personality through the many choices presented in the story — some visual novels do this and it really makes playing other routes worthwhile.

But let’s look at the disadvantageous side. For one, it makes relationships unrealistic sometimes-most heroines would love you and get all doki doki just because you’re oh-so-kind, despite having a personality of a rock. Well, not like I’m trying to say you shouldn’t be kind, just that in fictional romances I always desire context, or at the very least some sort of relationship dynamics and some visual novels I read have neither. Protagonists like these are especially common in most moege. Visual novels with more large-scale, and ambitious storytelling at least have a little more substance and tell us motivations and reasons as to why characters act the way they do, and more importantly how that reflects his relationships with the heroines. 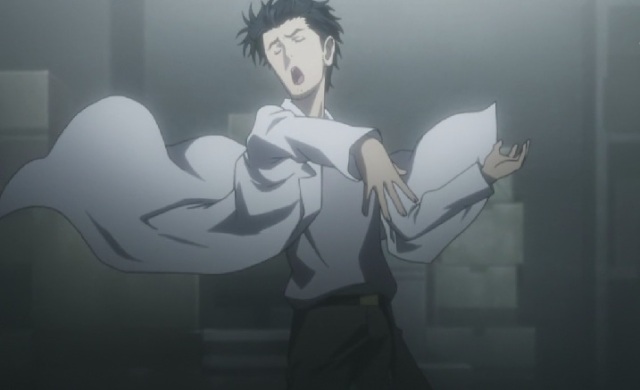 Okabe Rintarou, one of my favorite visual novel protagonists.

This is precisely why I actually like visual novel protagonists whose morality is a little in the grey area — anti-heroes. I feel a main character actually has more personality when they have a little villainous depth, this is the reason why I like Kyousuke from G-Senjou no Maou. Hell, you can already get me interested if your protagonist reacts just a little different in otherwise, stereotypical situations — Yuuji’s nonchalant expressions when stumbling upon lewd moments for one, and even Okabe’s exaggerated, over-the-top demeanor.

What do you feel about visual novel protagonists and their self-insert natures?

I'm a Gamer that dabbles in a little bit of everything. I'm big on Video Games, Visual Novels, Anime, Books and TV Series, but there's more to me than just those!
View all posts by Silvachief →
This entry was posted in Editorials. Bookmark the permalink.