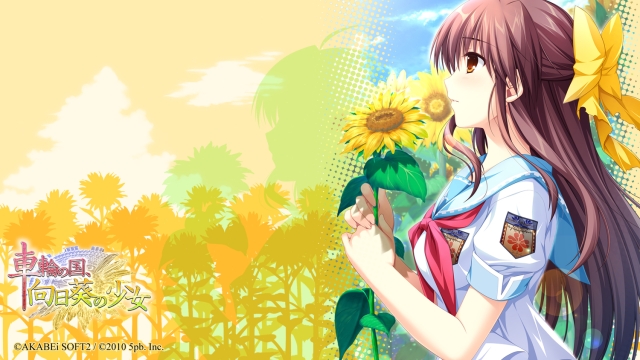 [Quick Note: This was another early work. It was originally very rigidly split up into Plot, Characters, A/V and Replayability sections, so the layout is a little different to my later reviews. Also, I spend a bit more time describing the plot than normal. Out of respect to my past self i’ve only made minor changes.]

Sharin is set in a country with a very different justice system to our own. Rather than the normal punishments of fines and imprisonment, the justice system in Sharin no Kuni is armed with a number of “obligations” to fit any crime a person may be guilty of. For example: A con-man may be denied his right to speak, or a murderer may be denied their right to have children (which seems a bit light in my opinion >.>). These obligations are given with the ultimate goal of rehabilitating each criminal so that they can become an upstanding member of society. To that end each rehabilitee is assigned a supervisor known as a “Special High Class Individual”, and that’s where Morita Kenichi, this story’s protagonist, comes in. 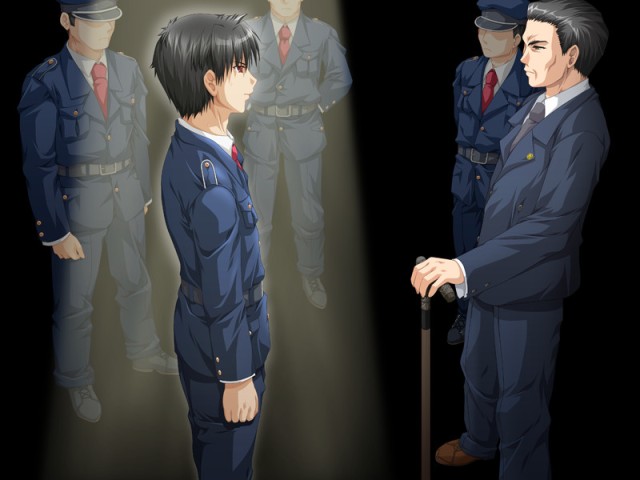 Morita has undergone years of arduous training to become a Special High Class Individual, and now all that stands in the way of his goal is the final examination which just happens to take place in the hometown he hasn’t been to in nearly a decade. The plot revolves around Morita’s interactions with the town’s inhabitants, some of them childhood friends that fail to recognise the man he has become (but who haven’t forgotten the person he was) and others that are new to the town. Needless to say, a number of these people have obligations that need to be resolved. There’s certainly more to the plot than I have mentioned here, but you’ll have to play the VN to experience it yourself.

I enjoyed Sharin no Kuni immensely. The story was riveting, sometimes so much so that I literally could not stop reading. This novel has my favourite kind of plot twists: the ones you don’t see coming, but as soon as you recall what has gone before in your mind it all makes sense; everything clicks into place almost audibly. It is an incredibly unique and entertaining experience that stirs your emotions and makes you care about the people involved. I would highly recommend this story to anyone.

Overall, I liked each and every character in Sharin no Kuni. Early in the story the protagonist grated on my nerves a little, but he repeatedly demonstrates the ability to step up to the plate when the situation is serious and also matures a little as the plot progresses (though one could argue that he is actually “recovering” from previous experiences). There are 4 heroines to choose from : Sachi, Touka, Natsumi and xxxxxx (mysterious, right?). While Natsumi is probably my favourite (I have a thing for the childhood friend card), I came to care about all of them by the end of the novel, which is usually indicative of good character design. The supporting cast was also well done, and the “villain” was excellent; I really hated the bastard in the end. 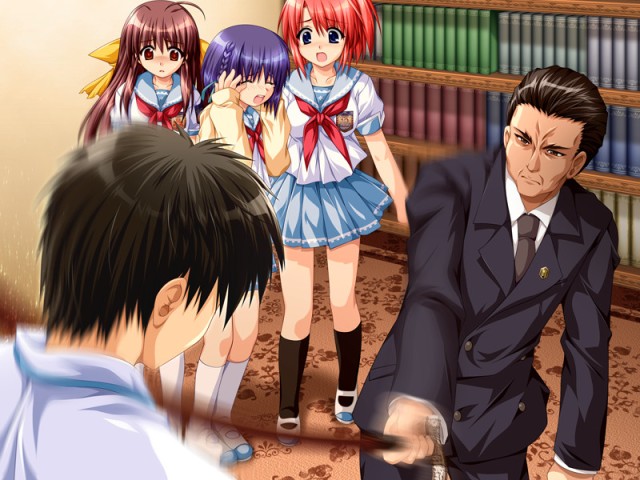 Sharin no Kuni is your average visual novel in that all of the CGs/Sprites are static, though there is some clever use of zooming in/out and setting the sprites at varying distances. The CGs were excellent, and each character’s poses suited their personalities well. I also liked that the main character was given a face early on, which many VNs avoid doing. Not much else to say here, really.

I really enjoyed Sharin no Kuni’s soundtrack. The BGM did a great job of helping to immerse the player in the story, with some very nice “exciting” tracks accompanying the equally enjoyable slow ones. While neither the opening nor ending voiced songs were my sort of thing, I felt that they suited the visual novel overall. The voice acting was spot on, being of high quality at all times and fitting each character well.

Sharin no Kuni has a total of 5 endings (only 4 of them really advance the story though) and it is with these that the visual novel’s biggest faults lie. Each ending changes the story nearly imperceptibly, with the only difference in each route being the inclusion of intimate scenes for your chosen heroine and a very brief epilogue at the end; the overall story remains essentially unchanged. While I’m glad that Akabei Soft2 fixed this issue in G-Senjou no Maou, it was disappointing that Sharin no Kuni was more or less over after the first playthrough. 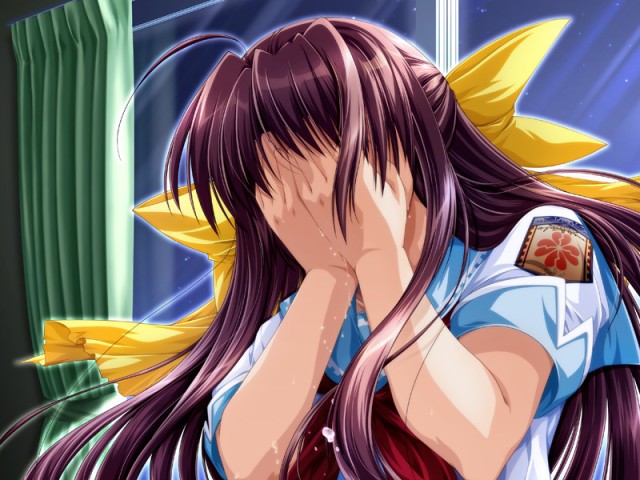 While the epilogues probably are worth viewing if you like the characters, they ultimately add very little to the experience and are incredibly short (with the exception of Natsumi’s ending, which I would recommend going for if you’re only aiming for one of them. Sachi fans will also enjoy her ending). Those of you who are disappointed by the endings may be happy to hear that the game’s fandisk (Sharin no Kuni, Yuukyuu no Shounenshoujo) contains extended epilogues, which I will talk about in a separate review.

Summary – Sharin no Kuni was an absolute pleasure to read; I really can’t express how much I enjoyed it. Sure, I could have done with more story for each heroine’s route, but I enjoyed the plot so much that I’m willing to overlook it for the most part. Both the art and sound were excellent, and I have no complaints about the interface. This is one of the novels I wish I could forget so I could read it all over again. 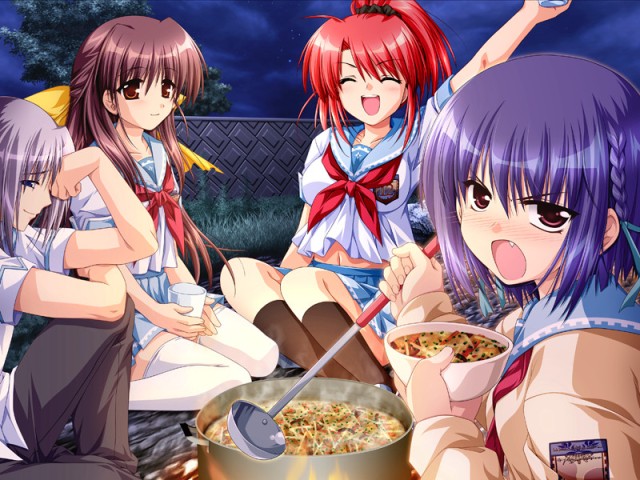 [Edit: I really should have included this in the original post somewhere, but here’s the opening movie for Sharin no Kuni if you’re interested!]

I'm a Gamer that dabbles in a little bit of everything. I'm big on Video Games, Visual Novels, Anime, Books and TV Series, but there's more to me than just those!
View all posts by Silvachief →
This entry was posted in Reviews, Visual Novel Reviews and tagged Akabei Soft, Akabei Soft2, Review, Sharin no Kuni, Sharin no Kuni Himawari no Shoujo, Visual Novel, visual novel review, VN, VN review. Bookmark the permalink.